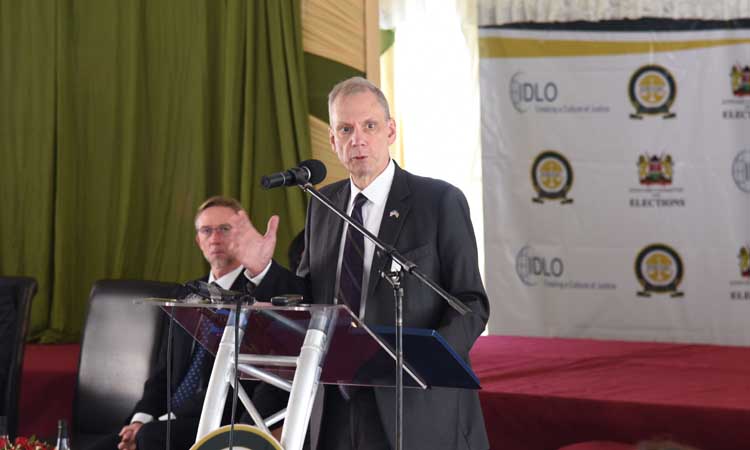 It is my pleasure to be here today at the launch of the Judicial Committee on Elections’ Annual Report and the International Development Law Organization’s Lessons Learned Brief on Electoral Dispute Resolution.

These publications are more than just documents; they lay out concrete steps that the judiciary has taken – and will take – to ensure that elections disputes can be resolved efficiently and fairly.

There is no democracy in the world, the United States included, in which people do not disagree over elections and politics.  Debate, disagreements, discussions — these are the very definition of a competitive political system.  In fact, it is often through our disagreements that we find better solutions to our problems.

And, as IDLO points out in their Lessons Learned Brief on EDR, “electoral disputes become problematic (only) when they are badly managed.” To me, that is a critical statement.  And, you are here today because you are committed to ensure electoral disputes are managed fairly, transparently, and quickly.

Electoral systems must establish procedures by which complaints over electoral decisions can be brought before an administrative or judicial body.  The system should guarantee the right to a hearing that includes full access to election dispute resolution proceedings.

When complainants do not have access to peaceful, legal avenues to address their grievances, then sometimes violent acts may seem to be viable alternatives.  But in reality, violent acts undermine the future of a country.

In the interest of maintaining public order, public confidence in the electoral process, and its results, is vital.  At the same time, electoral justice – from challenge to resolution – should be expeditious and transparent.

As the party nomination process for Kenya’s 2017 elections has now concluded, the United States congratulates the millions of Kenyans who participated in the process by going out to vote, exercising their democratic rights, and making their voices heard.  In resolving primary disputes, we urge that politicians who do not accept the result of the nomination, to use the established legal procedures to resolve disputes.

Indeed, there is no better reminder of the importance of getting electoral dispute resolution right than the political primaries that Kenyans experienced over the last few weeks.  The entire nomination process provided the first real opportunity in Kenya’s 2017 electoral process to show the public that, while men and women of good intentions may disagree, the process of deciding winners and losers and resolving challenges can be fair, accessible, and timely.

And the same is true for the general elections, which Kenya is quickly approaching.  They are just three months away.  This upcoming election is an important milestone for Kenya to reaffirm and strengthen democratic principles and processes.

Free, fair, credible, and peaceful elections in 2017 are essential for Kenya.  The United States supports Kenya as it works to hold elections in accordance with the law and the constitution and that ultimately reflect the will of Kenyan citizens.

To support these polls, the U.S. government has been harnessing the dynamism of Kenya’s musical talent to encourage youth to use their voice and vote in elections through #NiShow Power.  Kenya Election Violence Prevention program, implemented by Mercy Corps, is aimed at preventing violence before, during, and immediately after the 2017 elections. Through USAID, we are supporting the Kenya Electoral Assistance Program to work hand-in-hand to support IEBC to conduct free and fair elections. And, we are supporting the Carter Center to deploy a long-term, comprehensive observation mission to assess the electoral and political processes surrounding the August 2017 elections.

The U.S. Government is pleased be to be working with the government and civic institutions for such a worthy activity as supporting electoral dispute resolution in Kenya.

We will stand with Kenyan men and women to express themselves as candidates, voters, and citizens in order to make this a truly representative and inclusive process.

I encourage everyone – judicial and electoral institutions, political leaders from all parties, religious institutions and wananchi from across the country—to engage in constructive dialogue, work for credible elections, and pledge peace.  Kenya deserves nothing less.

While Kenya will have challenges in the days ahead, today we welcome the preparations that have been made by the judiciary, and indeed other key institutions including and especially the IEBC, so that all Kenyans will have a chance to go to the polls and freely exercise their right to vote and, in doing so, choose your leaders for the next five years.

We stand with you here today, as steadfast partners, as you rise to the challenge of ensuring that Kenya’s 2017 electoral process is free, fair, credible, and peaceful.  And in your challenge today of ensuring that conflicts can be managed well.