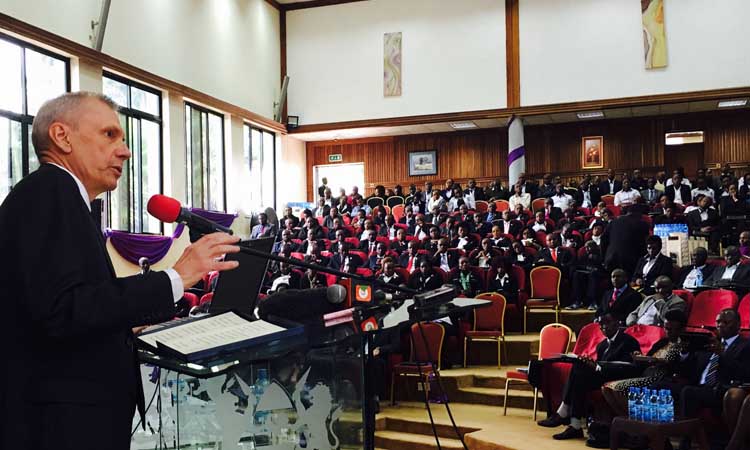 I am pleased to be here this morning and see so many prosecutors, especially so many young prosecutors… who have embarked on an extraordinarily important career.

This is the third time I have had the honor of giving remarks at your prosecutors’ colloquium.  The first time was in December 2012.  Back then, I said to your office of approximately 100 prosecutors that “assembled here together, for the first time in Kenyan history, is the most powerful constitutionally-created force in your criminal justice system.”  I continue to believe that the independent Office of the Director of Public Prosecutions is the most powerful constitutionally-created force in Kenya’s criminal justice sector.

That colloquium in 2012, like this one, came on the eve of national elections.  Then, like now, there were fears of election violence and a recognition that you, as representatives of the justice system, would be called upon to maintain order and to ensure that the electoral results adhered to the rule of law.

The second time I addressed Kenya’s prosecutors, in April 2014, you had grown to the point that the colloquium could no longer be held at a conference room in Naivasha.

And today, I am honored to give remarks to more than 600 prosecutors.  Today, the ODPP is present in all court stations, in all counties across your great country.  Today, you are involved much earlier in the investigative process to ensure that prosecution-guided investigations are more likely to lead to convictions.

I congratulate you for these successes.  I commend the leadership of your office and the Kenyan government for recognizing the importance of a well-staffed and impartial office of public prosecutors and its importance to the rule of law.

At the U.S. Embassy, we are proud to be partnering with the Government of Kenya in the justice sector.  The U.S.-Kenya collaboration is important for the security of both our countries.  One example of our cross-cutting collaboration is the Security Governance Initiative, or SGI, where our two countries have come together to address broad aspects of enhancing government’s ability to provide security and good governance to its citizens.  Through SGI, we are collaborating with the Kenyan justice sector on plea agreements and legal aid through two technical advisors based at our Embassy.  We are also collaborating with some fine prosecutors from your office on “service weeks” to try to reduce the backlog of cases.  Over the last two months, we held service weeks in Kitale, Shanzu, Lodwar, Bungoma, and Narok that have addressed hundreds of cases.

In Washington, D.C., our Justice Department has inscribed on the side of its building the following quote from the great philosopher John Locke: “Where law ends, tyranny begins.”  It is a reminder to everyone who sees it – and to the employees who work there – of the principle that no one should be above the law and that the rule of law must govern the actions of every citizen regardless of position, status, or wealth.

Turning this important ideal into reality falls to each of you, and indeed prosecutors around the world.  Daily, you are called upon to decide whether or not citizens will be prosecuted for their actions and possibly deprived of their liberty.  You are called upon to ensure that the law protects the powerless when they have been wronged by the powerful.  You are called upon to deal with many challenges from the threat of terrorism, to the scourge of corruption, and much more.  Your decisions alter the lives of ordinary Kenyans every day, whether it is by lodging charges against those who violate the law or by refusing to file charges when there is not sufficient evidence.

The upcoming elections make this ideal more critical than ever.  Kenyans know that free, fair, credible, and peaceful elections will propel the country forward and help realize the great promise of the 2010 Constitution.  They know these elections can consolidate their democracy, further devolution, and advance prosperity for all Kenyans.

To achieve this goal, Kenyans need confidence in the election process and its outcome.

As government officials, you are called upon to remain neutral during the heated election season.  This neutrality is even more essential for those called upon to enforce the law.  The ODPP, like other government agencies, will play a pivotal role in ensuring that confidence through adherence to the principle that no one is above the law regardless of political party, status, or wealth.  The DPP discussed the role in elections of Kenya’s many institutions and voters.  Everyone should share the commitment to free, fair, credible, and peaceful elections.  And, no Kenyan should die for an election.

The United States stands with you as we head into August, but these are, of course, Kenyan elections.  We do not support any particular candidate or any particular political party.  We do support the democratic process and the opportunities it provides.  We, along with other international friends of Kenya, are investing 8.5 billion KSH in support of the election process, including support for the IEBC and civic education.  We offer our help to ensure Kenyans have a free, fair, credible, and peaceful opportunity to choose their own leaders and decide Kenya’s future on August 8th.

I close with this thought: You have it in your power to help strengthen the rule of law in Kenya and realize all of the promise of the 2010 Constitution.  I urge you to do all you can to turn hope into reality.

I wish you much success with your colloquium and in your important work as prosecutors.