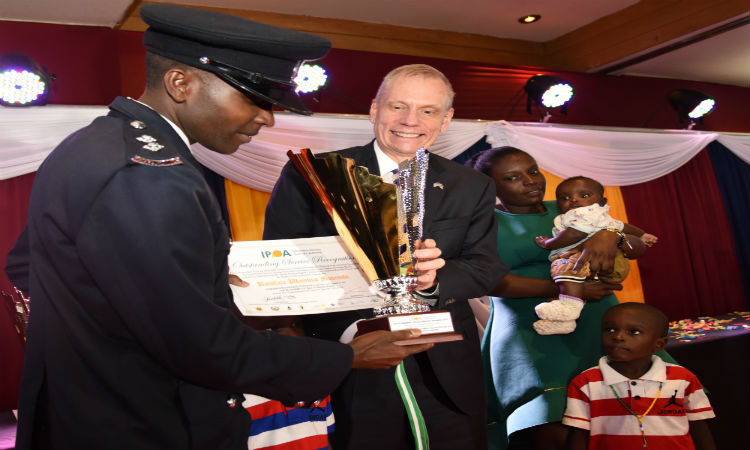 Ambassador Godec’s Remarks for the

I am honored to join you all today at the third annual Outstanding Police Service Awards.  I want to thank all the women and men serving in the National Police Service for the work that they do every day to maintain security in Kenya.

I also want to thank the Independent Policing Oversight Authority for hosting this very important event.

It is important that we have taken the time today to acknowledge the extraordinary work and service of Kenya’s police officers.  Your service is even more important given the security challenges that Kenya – and all nations — are facing.

I also want, at the outset, to take a moment to offer my condolences to the families and friends of police officers who were killed in the line of duty in the last year.  I know that there were dozens of nominations to recognize officers who died. While not everyone has the chance to be recognized at this ceremony, all of their contributions to maintaining security in Kenya are honored.  We greatly appreciate their service.

Reading the citations from those who paid the ultimate sacrifice for Kenya is like looking at a map of the security challenges facing this great country.

The threat of terrorism clearly continues.  While the police have been instrumental in thwarting attacks and disrupting terrorist cells, extremist groups like al-Shabaab have still perpetrated attacks.  These attacks often target members of the security services. Police officers have been killed being stationed in border camps alongside KDF officers in the war against al-Shabaab, and have been ambushed along the road.

Police officers, and many civilians, have also died or been injured in the ongoing attacks on farms and villages in Laikipia.  The ongoing struggle for grazing land and other resources has created a very dangerous situation for residents and security officers alike.

Kenya also continues to fight criminal gangs in order to make its communities safer.  Police have also played a key role in combatting the scourge of narcotics that threaten youth and communities across the country.

The United States remains one of Kenya’s strongest partners in the development and modernization of its security services.  We support both the military and the police service with millions of dollars’ worth of technical assistance, as well as equipment and training. We partner with Kenya to offer support on a huge variety of policing skills, such as crisis response, border control, emergency medicine, strategic communications, community policing, counter-narcotics, terrorism investigations, intelligence gathering, and wildlife protection.

We are concerned about police welfare as well.  For example, because of an impressive collaboration between the police service, the National Police Service Commission and the U.S. Embassy last year, over 600 Kenyan police officers were surveyed on the basic tasks they perform.  They also shared their views on pay and benefits, transfers and promotions, and the training and equipment available to them to perform these tasks.  The results of this survey, accepted by the Inspector General, will complement ongoing police reform efforts initiated within the service to make the lives of police officers better.

But the reason we are here today is to celebrate those police officers who have exhibited compassion, diligence, and creativity when interacting with community members.  Some of the officers nominated to receive IPOA’s outstanding service awards have used personal mobile phones as hotlines for reporting crime.  Others have had boreholes built.  While others counseled people living with HIV/AIDS.  At least one started a society for those interested in researching security and criminology.

This kind of attitude in policing – that the public comes first – is crucial.  A large part of establishing public safety in society is establishing policing with integrity.  Integrity really is the key to maintaining security.

In addition to supporting the skills and welfare of police officers, the U.S. government also supports police accountability mechanisms, like the IPOA.  The aim is to reinforce integrity within the National Police Service.  As one of the United States’ more well-known Supreme Court Justices Earl Warren once said “The police must obey the law while enforcing the law.”

Police services across the world — including in the United States — grapple with problems of integrity and efficiency.  These problems are not unique to Kenya.  But Kenya will benefit from everything it can do to prevent corruption and violent behavior in its policing services.  Police officers who take advantage of citizens financially or otherwise threaten to erode the integrity of the Service and the social fabric with the community in which they work.  When police officers engage in illegal activity or human rights abuses they threaten and undermine the very country itself.

But, happily, the vast majority of police are honest, dedicated and working to protect the Kenyan public.  Today, the IPOA concludes almost a year of work collecting and analyzing recommendations from community members about the exceptional work that police officers in Kenya do on a daily basis.  The IPOA and I, and all of the other guests here have come to celebrate model behavior by the police that we can all admire, and aspire to.  The United States helped support this event because we believe in the police service and its ideal of “providing professional and people-centered service through community partnership and upholding the rule of law for a safe and secure society.”

The winners today are champions of integrity in policing.  By being recognized today, you are showing IPOA, your fellow officers and the citizens you serve that you care about creating a safer, more secure Kenya that observes human rights.  Continue doing your great work, and encourage your colleagues to do the same. This will be particularly important as Kenya’s election gets nearer.  The police have a vital role to play in this election: to be politically neutral and to protect candidates, activists, voters and all Kenyans equally, fairly, and fully.

I want to thank the Cabinet Secretary, Police Service, and IPOA for inviting me here today.  And I want to say Hongera Sana to all of the police officers receiving awards today for their outstanding service to Kenya.  Asanteni sana for a job very well done.