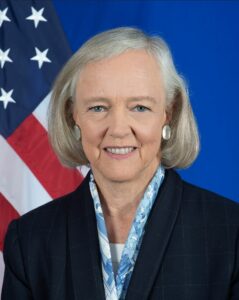 Meg Whitman was confirmed in a unanimous vote by the U.S. Senate as the eighteenth United States Ambassador to Kenya on July 14, 2022. She presented her credentials to His Excellency, President Uhuru Kenyatta, on August 5, 2022.

Ambassador Whitman has significant experience leading business organizations, from start-ups to large multinational companies in Silicon Valley. She has served as the President and CEO of Hewlett Packard Enterprise and the Hewlett-Packard Company, both multinational information technology companies. She also served as President and CEO of eBay Inc, an online marketplace and digital payments company.

Ms. Whitman has also been a member of a number of corporate boards of directors, including Procter & Gamble and General Motors.
Committed to equality in education and protection of the environment, Ambassador Whitman has been National Board Chair of Teach For America and has been a Member of the Board of Trustees of The Nature Conservancy.

Ambassador Whitman is married to Dr. Griffith Harsh, a neurosurgeon. They have two grown sons and two grandchildren.
Whitman holds an MBA from Harvard Business School and an AB in Economics from Princeton University.