(As prepared for delivery) 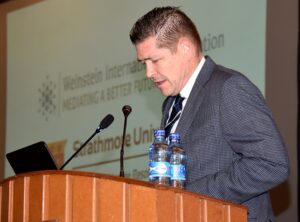 • The United States and Kenya have been partners for more than 55 years. Our friendship, which was elevated to a strategic partnership last year, was reaffirmed and strengthened in Washington, D.C. earlier this month, at the inaugural Bilateral Strategic Dialogue. I was pleased to be part of those discussions as we moved forward with new plans for economic prosperity and trade, defense and security. Our partnership is grounded in shared values, mutual cooperation and a common vision of Kenya becoming the shining star of Africa for prosperity and democracy.

• To achieve that vision, Kenya must have strong institutions committed to rules-based order that can tackle thievery at all levels. I believe Kenya is poised to be a true leader of East Africa and the continent. I envision Kenya going from beneficiary to benefactor, able to meet the needs of its own people and its neighbors. But as each of you know, this will never be possible without ending thievery regardless of who is implicated. President Kenyatta has made his commitment very clear as recently as yesterday. I am so very encouraged by this. The entire Government of Kenya and all Kenyans must decide once and for all that a prosperous future for all Kenyans is more important than the wealth or power of any individual. The next generation of Kenyans already know this. In the last week, I’ve met with Kenya’s future leaders in government, business, and entrepreneurship through the Young African Leaders Initiative or YALI. I traveled to Kisumu and met with young Kenyans who know that thievery is robbing them of the opportunity to make their nation great, and they know it will take the mantle of medical research and treatment. They are determined to pave a new path for Kenya. We stand with those ideals. The United States is prepared to use all tools at our disposal to help bring those proven to be involved in significant thievery to account, including applying U.S. immigration law.

• Fighting thievery requires a functional, fair, and transparent criminal justice system. For more than ten years, the United States government has supported Kenya’s efforts to address backlog in criminal matters through the development and implementation of plea bargaining. In 2008, with the support of the United States Department of Justice, Kenya enacted a plea agreement law permitting the prosecution and accused to resolve matters expeditiously. By doing this, Kenya became one of the first countries in East Africa to use plea negotiations to ensure effective administration of justice.

• Mediation, both in civil and criminal matters, plays a vital role in resolving case backlog in Kenya especially in the “service weeks” model. Through service weeks, stakeholders in the criminal justice system come together to identify cases of children in conflict with the law as well as open civil and family matters that can be resolved quickly through mediation and plea bargaining.

• In 2016, the United States partnered with the National Council on the Administration of Justice to implement service weeks to address case backlog in matters related to children. Since then, we’ve sponsored over 20 service weeks with the NCAJ’s Special Task Force on Children Matters and an estimated 4,000 cases have been resolved. The Chief Justice of the Supreme Court has acknowledged the significant impact service weeks has made in reducing case backlog in matters related to children. Resolving these cases quickly can get youth back into school and away from those who may try to persuade them to join terrorist groups or criminal gangs.

• But for plea bargaining to be effective, the government must fully fund its legal aid programs. All accused people in Kenya entitled to receive the assistance of defense counsel must be provided representation. Without the paid skills of paralegals and lawyers to move these cases forward, case resolution lags and the system becomes overwhelmed.

• Criminal mediation or plea bargaining can also help decongest prisons. Currently, the Kenyan prison system is operating well beyond capacity, holding twice as many people as it was designed to accommodate: 54,000 persons versus 27,000. Pretrial detainees account for nearly half of the prison population. We commend the Director of Public Prosecutions who’s embarking on an All for Justice initiative, focused on reducing prison congestion using resolution techniques like plea bargaining and the proven approach of the service week. The United States will continue to support efforts to enhance access to justice and increase the effective administration of justice.

• I commend everyone here for the important part you play in creating a better Kenya and a more just world. The United States will continue to work with you and stand by the side of Kenya to achieve a bright, prosperous, secure future.