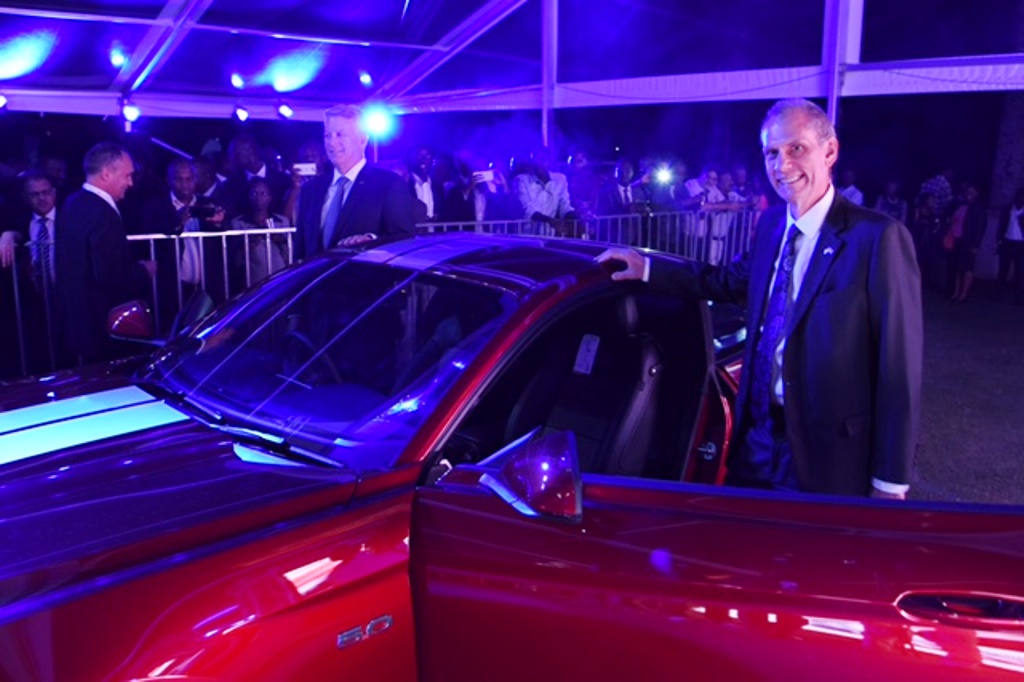 Ambassador Godec ready to take a Ford Mustang for a spin!

Launching an American Icon in Kenya

It’s wonderful to be here with all of you… thank you for attending the extraordinary launch in Kenya of an American icon, the Ford Mustang.  Tonight, with this launch, we will further deepen the commercial ties between Kenya and the United States.  But, even more importantly, we will celebrate technology, innovation, mobility, and the truly remarkable Ford Mustang!

From its modest beginning in 1964 to the incredible 660 horsepower Shelby GT, the Ford Mustang is unquestionably one of America’s best known, and best-loved, performance cars.  The Mustang – named after an American wild horse – has come to embody a sense of personal freedom and adventure in America’s ongoing love affair with the automobile.  Such is its appeal that it has been a star in hundreds… perhaps thousands of movies…. from “Goldfinger” to “Gone in 60 Seconds.”  So… it will come as no surprise… that I’ve always hoped to own a Mustang, especially a GT with a V8 engine… and a drop top!

Today’s sixth generation Mustang is among the world’s favorites, too.  It was the world’s best-selling sports coupe in 2015. The new Mustang, fully redesigned as of last year, is a leader among sports cars – it’s a showcase of great design and high technology that produce superb performance.  The 2014 addition of a right-hand-drive Mustang to Ford’s global vehicle lineup has allowed exports to more than 100 markets around the globe.  I am pleased to say that Kenya now joins that list.

So, thank you Ford Motors and the CMC Group for investing in the region and supporting local economic development.  The launch of the Mustang in Kenya is a clear sign that Ford Motor Company and the CMC Group are betting on the Kenyan market.  It is a sign of confidence in doing business here – in a positive, and fun way for Kenyan drivers.

Ford’s bet on Kenya is part, of course, of the rapidly expanding American engagement with Kenya and indeed all of Africa.  As President Obama said two weeks ago at the U.S. Africa Business Forum in New York “American investment in Africa is up 70 percent.  U.S. exports to Africa have surged. [And] In the last two years …American and African companies have concluded deals worth nearly $15 billion.”

U.S.-Kenya deals contribute significantly to that total.  Last year, our trade was $1.5 billion dollars.  It’s everything from aircraft and automobiles to tea and coffee.  Increasingly, American companies present here, are not just trading, but also investing.

And the U.S. government has a wide range of programs and activities to promote trade and investment.  The African Growth and Opportunity Act (AGOA) has opened the door for African exports to the United States.  Our Doing Business in Africa (DBIA) campaign is strengthening commercial relations across the continent.  Through Power Africa, we are helping Kenya and other countries build and deliver power reliably to 60 million African families and firms.  Trade Africa is simplifying and boosting regional across East Africa.

Our key commercial agencies are here too.  Eximbank, the U.S. Trade and Development Agency, and OPIC are active across the continent.  And, in that regard, I’m very pleased to say that OPIC has just opened an office at the American Embassy here in Nairobi.  So, in brief, the U.S. government and American companies are here in Kenya.  And, we have one message: we are ready to do business!

For the success of recent years, I also would like to thank the Kenyan government and private sector.  They have been strong partners in building and supporting broader and deeper business ties.

In closing, ladies and gentlemen, I am pleased that all of you joined us this evening to help celebrate the Kenyan debut of one of America’s most recognizable cars.   I would urge you all to take a good look at these beautiful vehicles, and to take a test drive — you’ll be glad you did!

I wish CMC Group and Ford Motor Company good fortune and continued success in Kenya and on the continent.