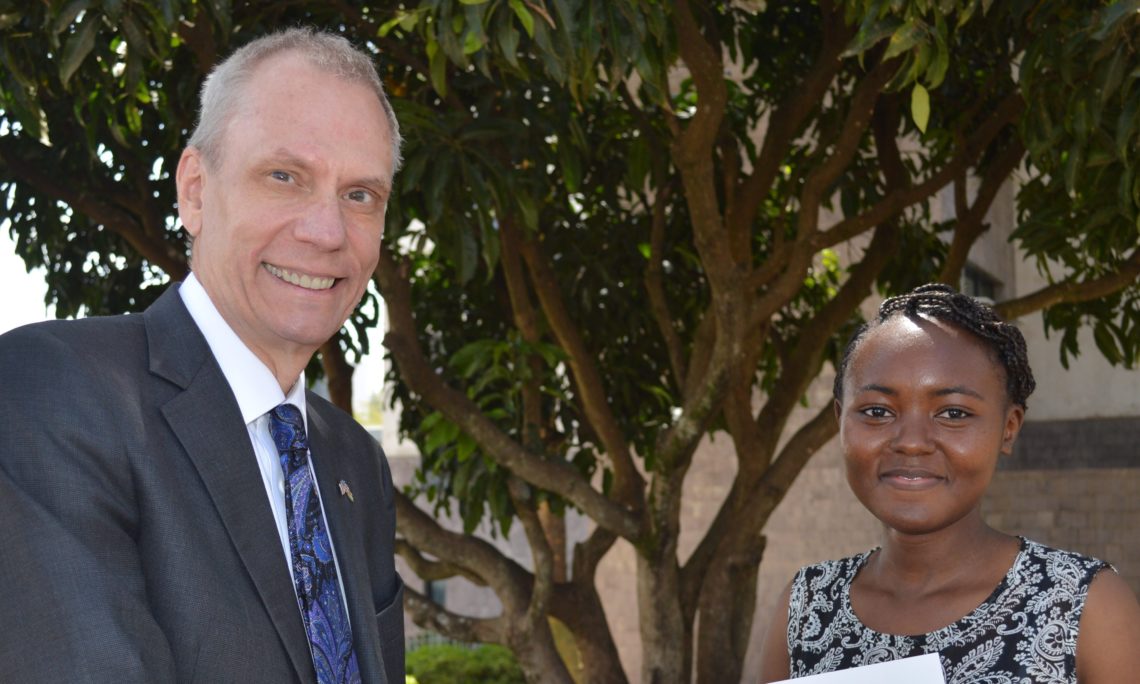 The Winning #OurOcean Essay: I Hear a Cry

In support of Secretary of State John Kerry’s hosting of the global Our Ocean conference in September, the U.S. Department of State’s Regional Environment Office for East Africa held a regional ocean-related photo and essay contest. The contest encouraged people to share their experiences (in photo or essay form) on how climate change is impacting #OurOcean and our lives. Kenya had a great turnout with over 200 submissions!  The winning essay was I Hear a Cry by Unelker Maoga from Mombasa.  Her inspiring piece on growing up near the ocean and seeing the bleaching of coral warns us “that our coral reefs will one day be a chapter in our history books if nothing is done at an individual and international level.” .  Unelker received an ocean-themed prize package and a certificate from Ambassador Godec.

I Hear a Cry

Although originally from western Kenya, I grew up in the famous town of Mombasa, located along the coast of East Africa’s Indian Ocean, and I simply fell in love with the incredible mass of water we call the ocean. White sandy beaches, crabs, sea shells and other interesting creatures that come along with yet another day at the beach had stolen my heart.  For the longest time, the town I grew up in was and still is considered a holiday destination, but with recent events my mind can’t help but wonder how long it will retain this title.

Having grown up a few meters from the beach, I can vividly remember listening to waves of the ocean crush and break on large rocks by the shore as I drifted off to sleep. The roars of the Indian Ocean grew even louder as successive nights turned into years but things still seemed the same, or at least it felt that way. Fourteen years had passed since my family relocated to the coast, and it wasn’t until my 20th birthday that I decided to volunteer at the local marine park near my home. With occasional news headlines that corals had been experiencing episodes of bleaching, I never realized how serious the matter was until I learnt that 80% of the coral at our marine park had been affected. As I snorkeled, it hit me that ocean acidification had hit hard as climate change continues to globally warm oceans. Our corals are bleaching and bleaching fast!

I have never been able to shake the shock off the back of my mind as marine life dies out and coral turns into rubble. The usual glances I make at the ocean on an ordinary morning now feel different, it now seems that the ocean helplessly glares back at me. My walks along the beach are now with a bowed head, watching the footprints I make in the sand to avoid the ocean which often causes the guilt I feel to express itself on my face.

Carbon emissions are still increasing and global temperatures rising. The fact also remain that our coral reefs will one day be a chapter in our history books if nothing is done at an individual and international level. My hope is that we will not look back and regret the decisions made during Our Ocean Conference in Washington D.C, September 2016.

As years have gone by, the roars of the ocean that kisses the East African shore line seem to be getting louder, but the sound I now hear as I drift off to sleep is not the roar that I am accustomed to, but a cry. The cry of bleached, damaged and worn out corals of the Indian Ocean. It took me 15 years to make out the sound but reluctantly I hear it… and if you listen quietly, so can you.