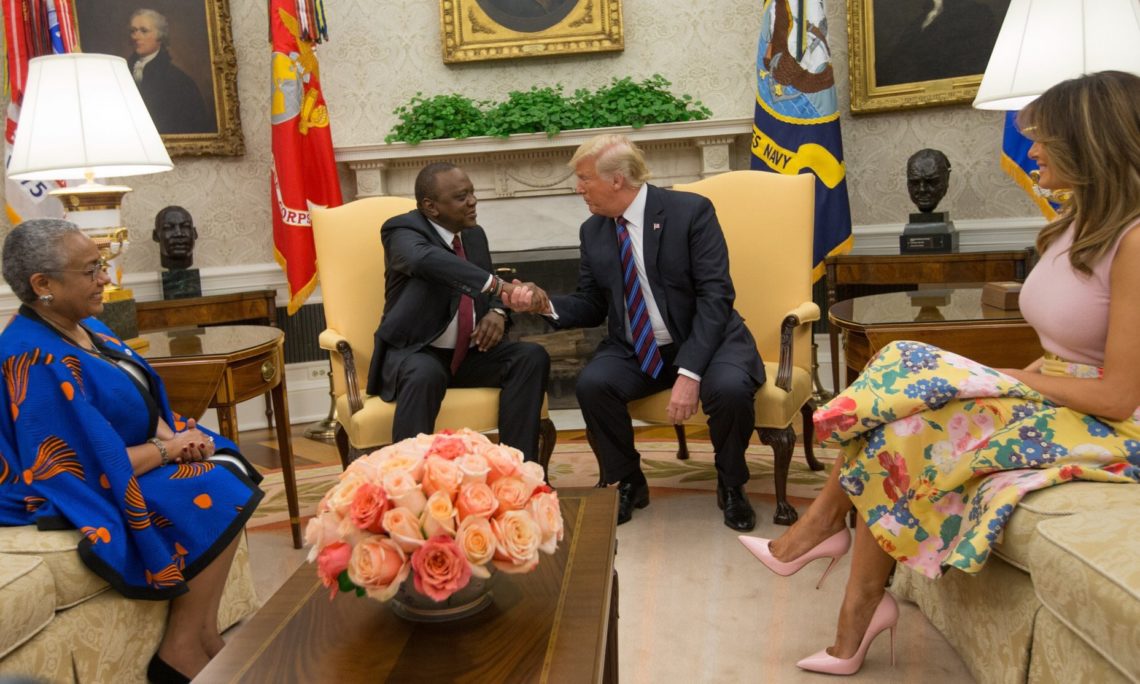 Office of the Press Secretary

President Donald J. Trump welcomed President Uhuru Kenyatta of Kenya to the White House today.  In marking 55 years of diplomatic relations between the United States and Kenya, and in recognition of the growing scope and depth of the engagements between the two countries, the leaders resolved to elevate the relationship to a Strategic Partnership, affirming it as a cornerstone of peace, stability and good governance in Africa and the Indian Ocean region.  This United States– Kenya Strategic Partnership will include an annual dialogue to advance mutual prosperity.

President Trump commended the Kenya Defence Forces for their service and sacrifice in combatting al-Shabaab and ISIS in Somalia.  President Trump also lauded Kenya for taking a leading role in the East African fight against terrorism and for its sustained dedication to this effort.  The leaders reaffirmed and strengthened their commitment to continued counterterrorism cooperation against violent extremists who seek to take innocent lives and deny fundamental human rights.  To further enhance this counterterrorism collaboration, President Trump welcomed Kenya’s decision to join the Global Coalition to Defeat ISIS.  President Trump also thanked President Kenyatta for his diplomatic efforts to bring peace to South Sudan and to the region more widely.

The leaders pledged to deepen defense and security cooperation, building on the recent acquisition of military equipment made in the United States and committed to further enhance Kenya Defence Forces capabilities.  Further, the United States pledged to strengthen Kenya’s national disaster and crisis response capacity.

President Kenyatta thanked President Trump for the United States’ continued support of the Kenyatta administration’s efforts towards greater accountability, transparency, and institution building.  As democracies committed to a rules-based international order, the United States and Kenya share a common vision for free and open societies. This includes global freedom of navigation, particularly in the Indo-Pacific region.

The leaders committed to expand their economic cooperation aimed at making their nations stronger and their citizens more prosperous.  In this regard, President Trump thanked President Kenyatta for hosting the United States delegation of the Advisory Council on Doing Business in Africa.  To further enhance the economic partnership, the two leaders agreed to establish a United States–Kenya Trade and Investment Working Group to explore ways to deepen ties between the two countries.  Further, the Presidents are pleased to announce that their governments established direct flights between Nairobi and New York City, a move that will expand the economic and cultural ties between the two great countries.

Recognizing the importance of high-quality infrastructure, President Trump and President Kenyatta welcomed the proposal by United States engineering and construction firm Bechtel Corporation to build a modern superhighway from Nairobi to Mombasa. Both sides agreed to undertake further consultations to conclude the terms of the financing agreement.

This and nearly $900 million in other commercial deals and engagements announced during the visit are expected to create thousands of American and Kenyan jobs, further enhancing the prosperity and economic competitiveness of both nations.

Other Statements and Remarks from the White House.