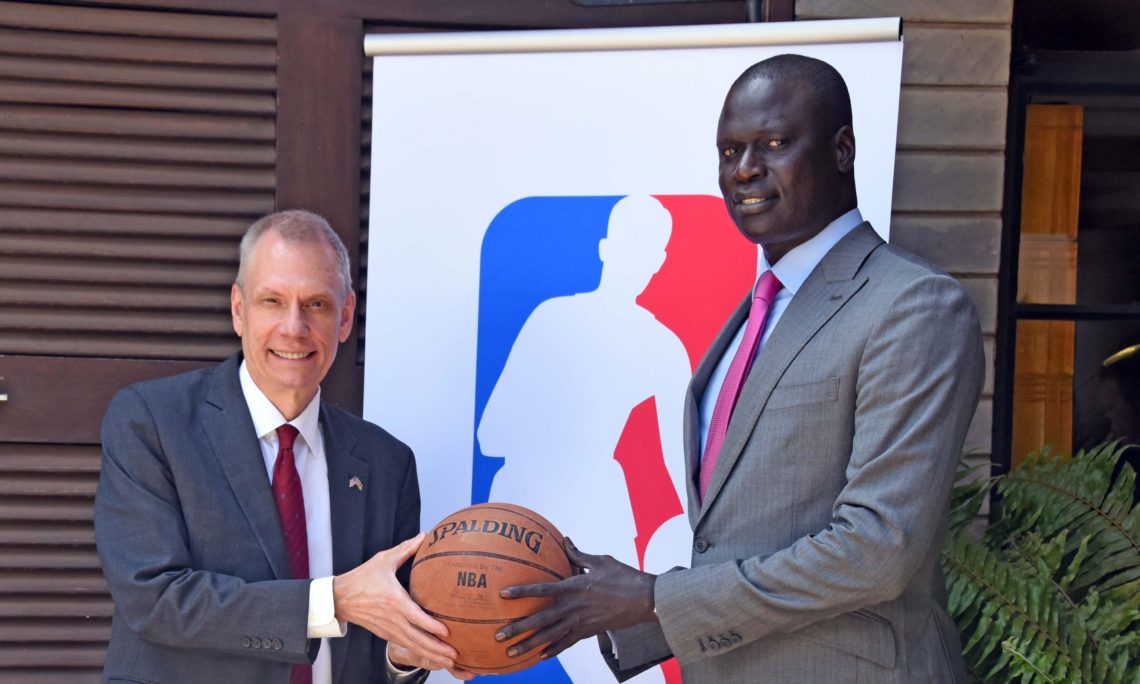 I’d like to offer a huge thank you to Gina, everyone at the Gina Din Group, and the NBA for this terrific initiative – the introduction of the Jr. NBA in Kenya.  Deepening the ties between Kenya and the United States is a critical part of my work here, and I cannot think of a better way to do that than through our mutual love of sports.  And when it comes to sports in America, the NBA is a superstar.  That is why I am thrilled to say “karibu Kenya” to the Jr. NBA.  Connecting Kenya’s youth with one of America’s greatest sports institutions is a sure-fire recipe for success – and some great basketball.

The NBA is one of America’s premier sports brands.  Literally millions of people around the world tune in every day during the NBA season to watch and cheer on their favorite teams.  Its top players are among the most recognized people on the planet.  Today’s huge stars include Steph Curry, LeBron James, and Kevin Durant.  But, of course, there have been so many over the years: Michael Jordan, Magic Johnson, Larry Bird, Kareem Abdul-Jabbar – the list of legendary players goes on and on.  And, this also includes stars born outside the United States — including Dikembe Mutombo of Congo and Hakeem Olajuwon of Nigeria.

Today’s NBA is truly international, with over 20 percent of its players now coming from outside the United States. These players embody the core American value at the heart of the NBA; no matter where you come from, you should be able to go as far as talent and hard work can take you.  And now, with the Jr. NBA here in Kenya, it’s my hope that it isn’t long before we see Kenyan names on the rosters of NBA teams.

But this is about much more than superstars or getting paid to play basketball.  Though most boys and girls who play organized basketball will not reach the professional levels, all of them will benefit in other ways.  The discipline, teamwork, drive, and leadership they will learn will be invaluable to them as they go forward.

And note that I said “boys and girls.”  As President Obama said during his historic visit to Kenya last year, “Imagine you have a team and you don’t let half the team play.”  Women’s basketball in America has benefitted from equal funding in universities under federal law and the creation of the Women’s National Basketball Association (WNBA). And this has produced real results:  as the winners of the last six Olympic gold medals, it’s clear that American women players are the best in the world.

So I hope too that everyone will encourage their daughters to take advantage of this opportunity as well.  The NBA’s commitment to women’s sports is serious, and I am pleased that it will be no different with the Jr. NBA here in Kenya.  Young people – regardless of gender – are critical to the future of this country.  They are not a problem to be solved — they are, in fact the solution.  Investing in them, just as you are doing here today, is the best investment you can make in Kenya’s future.

In closing, let me say that I like to back promises with action.  And so, it gives me great pleasure to announce that the U.S. Embassy will provide a grant of 10,000 dollars to help start the Jr. NBA in Kenya.  I hope that through this grant we can help establish the Jr. NBA as a fixture of Kenyan youth sports, and bring our two great nations even close together.

It’s great to welcome the Jr. NBA to Kenya.  It will be another amazing bridge between our two countries… our two peoples.