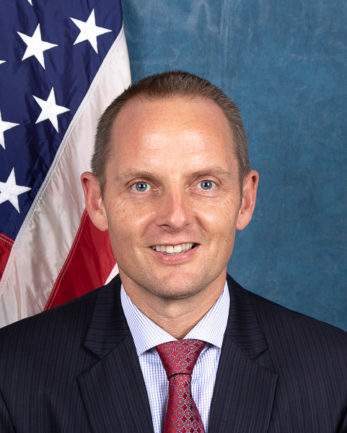 Eric Kneedler is a career member of the Senior Foreign Service. He has been Deputy Chief of Mission at the U.S. Embassy in Nairobi since April of 2019.  Eric began his assignment in Nairobi in 2017 as the Counselor for Political Affairs.  Eric has also served as the Counselor for Political Affairs at the U.S. Embassy in Manila and the Deputy Political Counselor at the U.S. Embassy in Bangkok.  Previous assignments include tours in Jakarta, Port Louis, Hong Kong, the State Department’s Operations Center, and the Bureau of European Affairs.  He speaks French, Indonesian, Thai, and some Cantonese.  Eric holds a B.A. from Pomona College and an M.A. in International Affairs from the Johns Hopkins School of Advanced International Studies.  A native of Lancaster, Pennsylvania, Eric and his wife Kristin have two children.