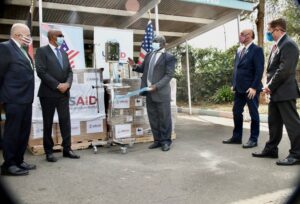 The following is attributable to Acting Spokesperson Pooja Jhunjhunwala:

U.S. Agency for International Development (USAID) Acting Administrator John Barsa traveled to the Republic of Kenya October 3-6, 2020, to highlight three recent investments in Kenyan women made by the White House-led Women’s Global Development and Prosperity (W-GDP) initiative. He also announced the donation of 200 American-made ventilators to support the Kenyan people during their response to the COVID-19 pandemic, and underscored the paramount importance of maintaining accountability and transparency with all U.S. Government assistance. During his visit, Acting Administrator Barsa also highlighted the U.S. Government’s commitment to religious freedom and USAID-funded community-based conservation programs in the Maasai Mara.

On October 4, 2020, Acting Administrator Barsa visited the Maasai Mara, Kenya’s most iconic destination, to observe USAID’s investments in community-based conservancies that are protecting biodiversity and enhancing stability. He also announced an additional $7 million in funding for locally-led activities to increase USAID’s conservation work in Kenya.

On October 5, 2020, Acting Administrator Barsa and Ambassador McCarter held a roundtable discussion with female entrepreneurs, including Kendi Ntwiga, Country Manager for Microsoft, on economic empowerment and growth. The Acting Administrator highlighted the W-GDP initiatives in Kenya that are empowering women for economic growth. In particular, the new W-GDP Investing in Kenyan Women program will mobilize $30 million in commercial investment and finance for local women entrepreneurs through USAID’s Kenya Investment Mechanism over the next three years

To conclude the trip, Acting Administrator Barsa and Ambassador McCarter announced the donation of 200 U.S.-manufactured ventilators for use in Kenyan health facilities that are treating patients with COVID-19. The Acting Administrator noted that, even prior to this donation, the United States had provided $50 million in assistance related to COVID-19 in Kenya. The Ambassador and the Acting Administrator reaffirmed that the United States Government will continue working closely with national and county governments and civil society in Kenya to ensure full accountability and transparency for these contributions.