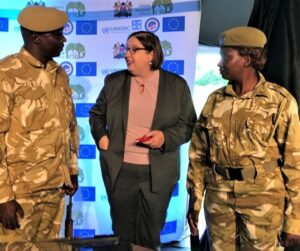 Good morning esteemed colleagues and partners in our efforts to combat wildlife trafficking.  I am so happy to be here with you all on Anti-corruption Day, to celebrate the achievements of the Kenya Wildlife Service in preventing and combating corruption, as well as reaffirm our collective commitment to continued progress on these efforts.

Stopping wildlife trafficking globally is a priority for the United States.  Valued at an estimated $23 billion annually, wildlife trafficking is a multi-billion-dollar transnational organized crime and a critical conversation issue.  It pushes protected species to the brink of extinction, impedes legitimate economic growth and development, threatens security and stability, undermines the rule of law, and increases the risks of disease.

Corruption is the critical link that enables wildlife trafficking and organized crime writ large to flourish.  Corruption occurs on all levels, from failures at low level enforcement to high-level government officials.  The groups involved in wildlife trafficking are not small-time sellers, but major criminal syndicates that derive substantial profits from these goods.  Corruption allows these syndicates to perpetrate these crimes and keep the risk of arrest and prosecution low.

Corruption is diverse and adaptable, evolving to exploit systemic or institutional weaknesses.  Systemic corruption and bribery allow wildlife products to be trafficked, despite the laws on the books, enabling trafficking networks to operate with impunity.  This undermines the rule of law and creates instability by empowering criminal organizations.  Corruption is an insidious form of crime that can seep into the most honorable of hosts, and, like a disease, rot the core from the inside out, permanently adulterating their integrity and decency.

The United States takes a comprehensive approach to fighting corruption.  We work to hold the corrupt accountable through robust diplomatic engagement, support for multi-stakeholder initiatives and a role for civil society, the provision of foreign assistance to build stronger partners and transparent institutions, and the application of targeted sanctions and visa restrictions.  We can only tackle corruption effectively with a strategy that includes these many tools and with the support of our partners around the globe.

I am happy to be in Kenya today, a strong partner in our fight against transnational crime and corruption.  President Uhuru Kenyatta himself has publicly described corruption as a threat to national security and both in word and deed has acted to curb public corruption.

The U.S. and Kenya have a strong relationship upon which to galvanize efforts to combat corruption.  We have worked together with the Ethics and Anti-Corruption Commission to help manage complex, transnational cases which have seen U.S. and Kenyan law enforcement officers and prosecutors successfully working together.

The work Kenya Wildlife Service and UNODC are doing together is another example of Kenya’s dedication to combating corruption.  The leadership at KWS recognizes the risks associated with corruption and is working to safeguard its organization from corruptive influences through the establishment of the Code of Conduct and Corruption Prevention Policy that we celebrate here today.  These are important first steps that will ensure the staff and organization embodies the professionalism befitting the Kenya Wildlife Service.

We applaud the efforts  KWS is making toward improving internal controls and corruption prevention, because it is only when we close the gaps that allow corruption  to flourish that we are able to reduce the space that criminals have to operate, and effectively  target those criminal organizations that seek to weaken and exploit us.

I look forward to continuing our partnership with KWS and the Kenya government to combat corruption, wildlife trafficking, and broader transnational organized crime.