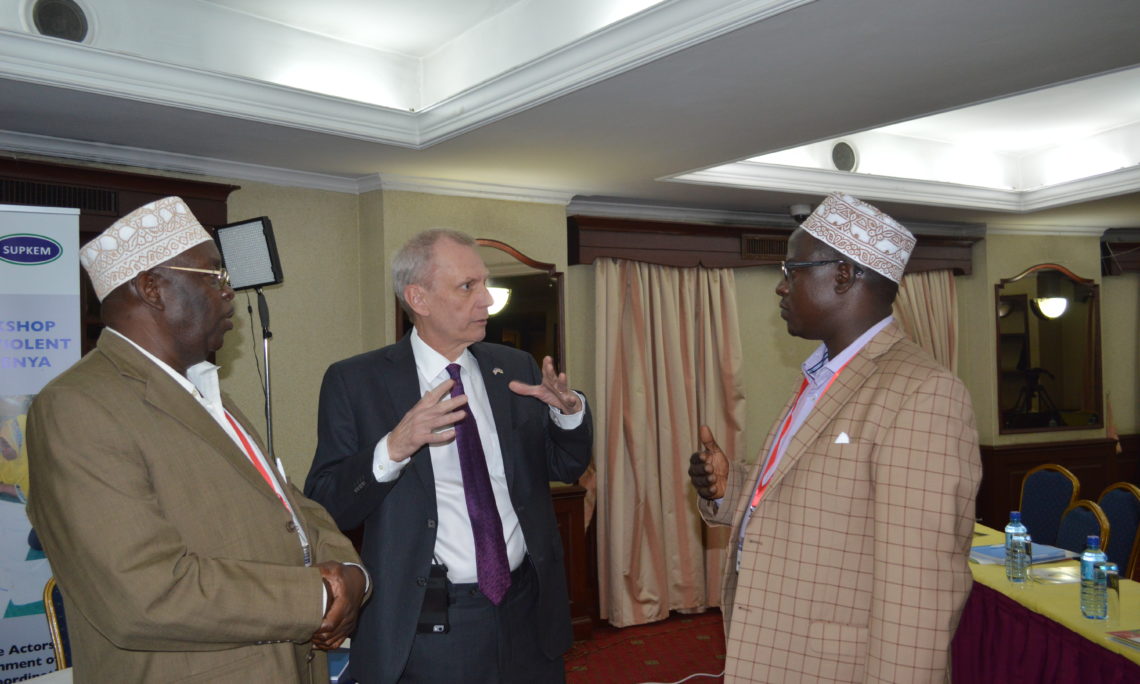 I am pleased to be here with you today.  At the outset, on behalf of the United States, I would like to offer my condolences to all Kenyans in the aftermath of the terrible terrorist attack in Mandera yesterday.  Our hearts go out, in particular, to the families and friends of those who were murdered or injured by al-Shabaab.  As the White House said yesterday in a statement, we strongly condemn this attack. We continue to stand with Kenya in the fight against terrorism

I also congratulate SUPKEM and all of the supporting institutions for providing this opportunity to discuss Kenya’s progress in the effort against violent extremism.  I welcome the chance to discuss the critical role that civil society plays in ensuring these efforts are effective.  I understand that the discussions over the past two days have underscored that we still face many challenges.  While that is true, together we also bring great strength in confronting them.

For some time now, Kenyan communities, religious leaders, local organizations, and international partners have worked alongside the Government of Kenya to design a strategy for countering violent extremism.  In early September, we saw these efforts realized with the announcement of a Kenyan national strategy.  The strategy identifies what is needed for effective CVE work, including the rehabilitation and reintegration of returning foreign fighters, coordination with local officials and security actors, and the importance of counter-messaging.

I applaud the work that went into the development and launch of the strategy.  It has placed Kenya among the first countries in Africa to pursue national-level coordination of all CVE efforts.  But of course, the strategy itself is just the beginning.

The next, and most important, step is implementation.  I believe we can all agree that the Kenyan government cannot do this alone.  This must be a “whole of society” effort.   No government can effectively tackle such a complex issue as violent extremism without broad participation and support.  Kenya’s strategy recognizes that civil society and religious communities are at the heart of countering violent extremism.  They have a unique spot at the junction of the people and their government, and can give voice to the concerns and threats facing Kenya’s most vulnerable communities – those ripe for radicalization and recruitment.

Fanatics promoting extremist ideologies are working hard to divide us.  They use narratives that seek to pit people of differing faiths against one another.  They know that it is easier to convince young men and women to join a violent, extremist cause if those young men and women feel separated from, discriminated against, or alienated by their own communities, their own government.  To this end, during President Obama’s visit to Kenya last year, he asked us to remember that Muslim citizens, in both of our countries, “are our brothers; they are our sisters. [And] we have to reject calls that allow us to be divided.”

Those of us working to counter extremist ideology, radicalization, and recruitment to violence know that our success depends on our collective ability to counter these divisive narratives.  However, this is no easy task and requires that we get a number of things right.

First, Kenya needs strong, well-coordinated civil society and faith-based institutions.  These groups and individuals serve as credible voices and are often best placed to understand grievances, leverage networks, and deliver messages on behalf of communities.  Of course, they are also stronger if they stand together and speak with one voice.  So, I applaud SUPKEM’s efforts to bring so many influential organizations and advocates together under one umbrella.

Third, it is important that the Kenyan government work to address grievances that may contribute to violent extremism.  Concerns include: dissatisfaction over land rights, difficulty in obtaining identification cards, and for some communities, generations of frustration over perceived or real discrimination.  Let me be clear: under no circumstances do these grievances justify the use of violence.  But all of us must recognize the role these frustrations play in opening recruitment opportunities for terrorist groups.  Kenyan leaders must engage government and non-government entities alike, at the county and community levels, to acknowledge and address these issues.

Finally, to effectively counter violent extremism, all stakeholders need to better understand which tools are most effective in countering extremist recruitment and radicalization.  To that end, the U.S. government is supporting programs that build community resilience, improve local governance, and encourage interaction between the security sector and communities to counter violent activities.  Just this year, we invested $7.2 million (720 million KSH) in new CVE efforts in Kenya as part of the Counterterrorism Partnerships Fund.

I will finish with this:  Nearly two years ago, President Obama and the U.S. government called for a more comprehensive approach to violent extremism, one that involved all stakeholders, including civil society.  Kenya has proven to be a leader on the continent in taking action against violent extremism, but there is much to be done.  I look forward to continuing our work together, to supporting efforts to address the grievances that make communities and individuals more vulnerable to violent ideologies.  I have no doubt that our combined efforts can make a difference and contribute to a safer and more prosperous Kenya.  Thank you for your hard work so far.  We must continue forward, hand in hand, and win this fight.