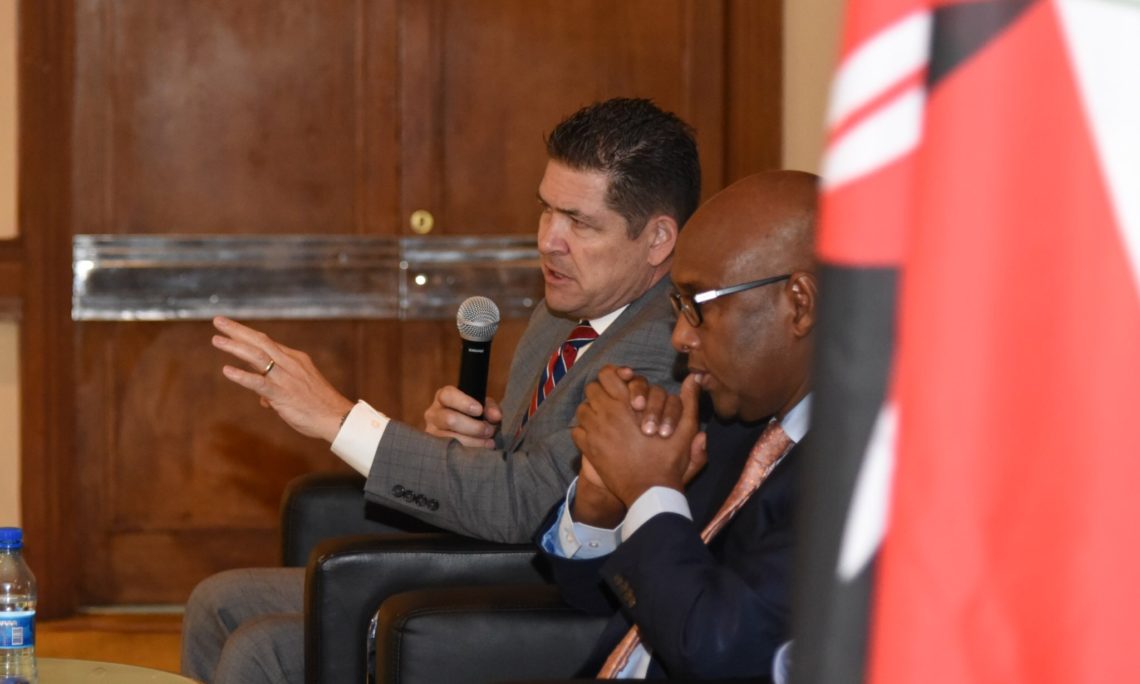 The United States – A Value Proposition

This is a pivotal time in the history of Kenya. The handshake last year that paved the way for a stronger democracy rooted in peaceful dialogue and post-election political stability has allowed Kenya’s economy to continue growing.  By all accounts, Kenya is poised to be Africa’s shining star.  Opportunities for advancements in health, education, justice, and prosperity are set clearly before us.  The United States stands ready to help ensure those opportunities become realities for the Kenyan people.

Our new strategic partnership with Kenya holds the promise of great prosperity for both of our countries and we want our investments – both public and private – to provide the maximum benefits possible.  Our governments have built a relationship rooted in common values.  The door is open for private sector-led growth to be the engine that will transform Kenya.

The United States government, non-government, and private entities contribute over 100 billion Kenyan shillings each year in health care, agriculture, education, security, and more in Kenya.  These are investments in Kenya’s people, not loans. Over one million people are healthy, productive members of society due to the antiretroviral medication provided free by the United States government, a 60 billion Kenyan shilling annual investment. Our work with the brave members of the Kenyan Defence Forces to combat al-Shabaab is keeping the country safe from terrorism.  And groundbreaking new private investment is “jembe tayari”, so let’s get started.

The United States economy depends on sound infrastructure and services to facilitate long-term growth in jobs, education, and government revenues, and we want to help Kenya improve in both areas.  U.S. companies deliver world leading technologies and innovation that support the Big Four.  The U.S. model focuses on sustainable financing, not unmanageable debt.  We believe that hiring Kenyans to manage, lead, and do the skilled work represents the best path to long-term profitability and self reliance.

A clear example of how governments, workers, managers, and Kenyans all prosper through transparent business with U.S. companies is the Mombasa-Nairobi highway project that the Kenyan government awarded to Bechtel, a world-class U.S. engineering company.  Presidents Trump and Kenyatta committed to concluding the terms of the financing agreement in Washington last year, recognizing the benefits of the project.

The new Mombasa-Nairobi highway makes good sense for Kenya’s infrastructure, economy, trade, and regional leadership.  With 80 percent of East Africa’s trade transiting Mombasa, the existing road and rail service cannot keep up with growing domestic and regional growth and trade.  The new four-lane highway will be built to a depth of 90 cm, twice that of other highways.  More than 70 percent of the estimated 4,000 employees working on the road would be Kenyans, with skill-based job training and apprenticeships for an additional 2,000.  And best environmental practices will preserve wildlife and boost Kenya’s tourism sector.

Perhaps most importantly, the highway provides real value for Kenya.  At a cost half the price of rail and roads previously built, the highway will be built in segments, leveraging private investors to minimize government debt.  The highway will be an achievement Kenyans can be proud of, benefiting current and future generations.

Doing business with the United States can help end corruption at all levels.  U.S. companies are subject to the Foreign Corrupt Practices Act, which means Kenya has the U.S. Department of Justice on its team to ensure business is conducted without graft.  But for Kenya to succeed, it must end brazen corruption by a minority that operates with impunity, undermining the hard work and good will of the Kenyan people.

President Kenyatta is committed to this effort and the United States stands firmly in support of the campaign to end corruption and ensure accountability.  I believe that a government based on transparency, inclusion, and equality is one that will bring its people greatness, and I promise you that as long as Kenya continues to strive for these goals, the United States will be Kenya’s best ally, pairing the generosity of the American people with dignity and respect on the road to self-reliance.   As the next generation of leaders in Kenya stands up against corruption and delivers opportunity for the youth of the nation, the United States will be by your side.  Tutafanya kazi pamoja. Happy Easter to all.