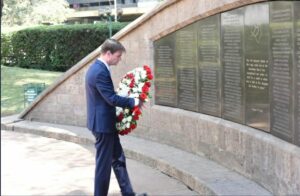 (As prepared for delivery)

Today, I laid a wreath to commemorate the victims of the 1998 bombing of U.S. Embassy Nairobi.  It is also in remembrance of the lives lost in Dar es Salaam.

Twenty‑one years ago, I stood here in the aftermath of the horrific bombing of America’s embassy.

Then and now, we remember and mourn those who were killed, and we stand with all who were injured or affected by this brutal attack.  In an awful moment, the lives of thousands changed forever, as did the lives of their families and friends.

Al-Qai’da’s immediate purpose was to kill and destroy, but they also sought to divide the friendship between Kenya and America, and to undermine the values we both hold dear – to stand together for freedom, for justice, and for peace.

They failed then as terrorists continue to fail today.  Their evil did not and will not separate the friendship and partnership that define U.S.-Kenya relations.

Over the past 21 years, our security cooperation has grown and deepened.  The United States and Kenya trust each other – with our lives when needed.

We will continue to enhance counterterrorism, defense, and maritime surveillance security cooperation through intelligence sharing and capacity building.

We will maintain our strong strategic alliance with Kenya to fight the terrorist threat from al-Shabaab and any others threatening to destabilize the peace in Kenya.

As tomorrow marks the 21st anniversary of this senseless tragedy, I extend my heartfelt condolences to all who suffered greatly from this day.