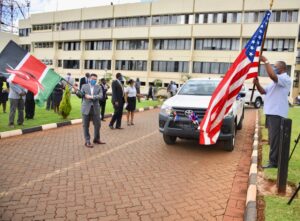 Nairobi, Kenya, May 29, 2020 – U.S. Ambassador to Kenya Kyle McCarter delivered 10 Toyota Hilux pickup trucks to the Directorate of Criminal Investigations (DCI) and the Ethics and Anti-Corruption Commission (EACC) for use by their investigators to combat corruption and drug trafficking. The donation was made by the United States Department of Defense US Africa Command (AFRICOM) in coordination with the U.S. Drug Enforcement Administration (DEA) and U.S. Homeland Security Investigations (HSI).

Speaking at the handover event, Ambassador McCarter said, “The United States is proud to stand alongside Kenya and support our mutual law enforcement efforts. The important work of the DCI and EACC in rooting out corruption and holding corrupt individuals accountable is critical to a strong democracy. During difficult times, neither law enforcement officers nor true friends shrink from their commitments, and the United States will continue to stand with Kenya.”

The donation of these vehicles will help further efforts between the Government of Kenya and the United States in their anti-corruption and anti-drug trafficking efforts as well as the investigation of transnational criminal organizations.  The United States is committed to working with its Kenyan law enforcement partners to help preserve and strengthen the rule of law in Kenya.

The DCI Counter Narcotics Program statement for the handover noted, “The DCI has immensely benefitted from the assistance extended by the United States  Government through the DEA , in establishing a Formal Vetted Unit that was subsequently upgraded to a Sensitive Investigative Unit, dedicated to conducting major counter-narcotics investigations with a view to neutralize, dismantle, and prosecute major drugs and narcotrafficking networks at national and international level in order to promote mutual benefit for DEA and the National Police Service.”

“The United States has been a great partner to the EACC through valuable technical support, collaboration in capacity building through staff training, and invaluable logistical resources to boost our efficiency, especially in cross border investigations,” noted the statement of the EACC during the handover.

The delivery of these vehicles will provide increased and faster response by Kenyan investigators in difficult to reach areas for their operational activities.  The United States-Kenya strategic partnership is growing across its breadth and depth even as we fight together to defeat COVID-19.