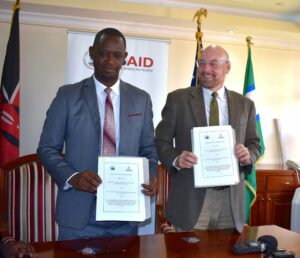 Nairobi, Kenya. February 26, 2020 – The U.S. Government, through the U.S. Agency for International Development (USAID) and the Office of Food for Peace (FFP), are launching a new program to reduce persistent acute malnutrition rates in northern Kenya.

Acute malnutrition rates in northern Kenya are currently at or above emergency levels and the causes of infant and child malnutrition are complex.  The U.S. Government’s new program seeks sustainable solutions that go beyond humanitarian assistance.  With an investment of $186 million over five years, the USAID Nawiri program will target the root of food security and malnutrition problems in Isiolo, Marsabit, Samburu, and Turkana Counties.

“The United States Government is shifting the way we work. We want our programs to be co-created, co-implemented, and co-measured to address problems and solve them at the county level,” explained USAID Mission Director Mark Meassick.

USAID has signed Memorandum of Understandings (MOU) with Marsabit and Isiolo counties.  In the next few weeks, USAID and the other two counties plan to sign MOUs as well.  These MOUs signify a joint commitment to Kenyan-led development such as the Nawiri program. They will also provide a framework to guide the new way that USAID and the counties will do business together going forward.

USAID Nawiri is a prime example of the type of work USAID plans to pursue under the new MOUs. Throughout the program, USAID will co-design and innovate with community and local government stakeholders. The program will support communities to solve their own challenges to create more sustainable solutions while aligning with Government of Kenya priorities.

“Malnutrition perpetuates a vicious cycle of poverty and affects economic development. If fully implemented, this project would go a long way in bridging gaps in nutrition and moving the county towards the goal of a healthy population,” His Excellency Mohamud Ali, Marsabit Governor said.