United States Mission to the U.N.

The United States Permanent Mission to the United Nations Office in Nairobi (UNON), UN Environment Programme (UNEP) and UN Human Settlements Programme (UN-HABITAT) works with the staff of these organizations and with the representatives of other member states to cooperatively advance the U.S. objectives of protecting the environment and finding solutions to the phenomenon of rapid urbanization, while reducing poverty and promoting economic growth.

The Mission carries out this work through participation in the meetings of the Member States of UNEP and HABITAT, through informal consultations, and by serving as a link between these Nairobi-based UN programs and the various parts of the U.S. Government that engage with them. In addition, the Mission also contributes to the U.S. Government’s efforts to support UN reform and improve the overall efficiency and effectiveness of the UN through these programs.

Permanent Representative to the USUN Mission in Nairobi

Permanent Representative to the USUN Mission in Nairobi

William (“Bill”) Lehmberg is the new USUN-Nairobi Permanent Representative. Prior to his arrival in Nairobi, he completed a three-year assignment as the Counselor for Multilateral Economic & Political Affairs at USUN-Geneva where he helped lead U.S. engagement with ILO, ITU, WIPO and WHO particularly on governance reform issues. He also served as the Deputy Economic Counselor at the U.S. Mission to the OECD from 2013 until 2016 and worked as Deputy Economic Counselor at Embassy Baghdad from 2012-2013. Other assignments include Economic Chief at Consulate Cape Town (2010-2012); Labor Officer at Embassy Nairobi (2008-2010); Refugee Coordinator at Embassy Nairobi (2006-2008); Iraq Desk Officer for the bureau of Population, Refugees and Migration (2004-2006); Watch Officer in the Operations Center (2003-2004); Consular Officer at Embassy Windhoek (2001-2003); and Economic Officer at Embassy Bogota (1999-2001). 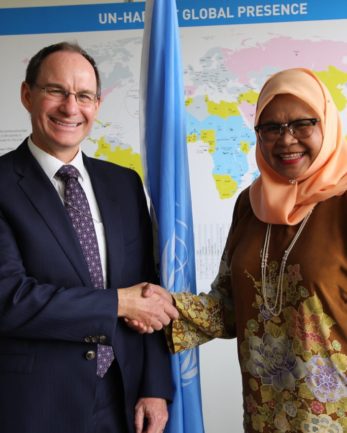