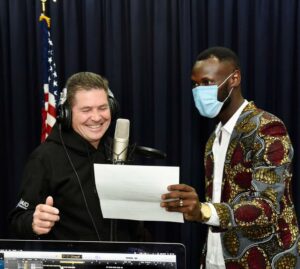 Nairobi, November 5, 2020 – The three-week #16BarsforPeace hip hop campaign targeting Kenyan youth on Facebook, Instagram and Twitter has announced its top three winners and released a peace anthem, Mbekse, on YouTube. The campaign was co-created and led by Kennedy Ombima aka King Kaka, a popular Kenyan rapper, entrepreneur, and philanthropist in partnership with the United States Agency for International Development (USAID).

Within the first day of launch, the campaign had about 1.3 million impressions on social media. At the end of the campaign nearly 350 video submissions from Kenyans of all ages, ethnicities, genders, and religions, elevated positive and inspiring conversations and interpretations of peace.

The campaign winner, Ramsizo from Dandora, Nairobi County challenged young people to seek peace as a way to maintain their independence to make money and speak freely on issues affecting them. Ramsizo is featured in a music video, Mbekse, along with Femi One, Jadi, and the U.S. Ambassador to Kenya Kyle McCarter, the link is here: https://youtu.be/nz5NIfHTdKo

“The youth of Kenya have delivered a strong message of peace and unity with King Kaka and his team in their unique exciting style. We need to listen well and do our part to stand for peace. I am grateful that I had the chance to add my voice to theirs. Together we have the power to make the world a better place — one bar at a time,” said Ambassador McCarter.

The winners received cash prizes and merchandise, but the best prize was contributing to a national conversation on peacebuilding in Kenya. King Kaka will offer mentorship.  Nduati Murigi and Reetah, second and third place winners respectively impressed the judges with their delivery and content. Nduati reiterated the importance of speaking up against gender-based violence and maintaining peace at home while Reetah urged political leaders to be at the forefront of peacebuilding initiatives.

“This was a very humbling experience, getting to hear the voices of Kenyan youth expressing what peace means to them through hip-hop. I enjoy mentoring young hip hop artists and this was another opportunity for me to engage them at a more personal level on a subject close to my heart,” King Kaka said. “I was also honoured to teach the very cool Ambassador Kyle McCarter how to spit some hip hop bars. He delivered a dope verse for our anthem, you will all be blown away!” Kaka added.

Through their lyrics, #16BarsForPeace participants emphasized the centrality of peace to development, recognizing it as essential to attaining quality education and earning a living. Elections and ethnicity also featured prominently as issues essential to peace and progress.